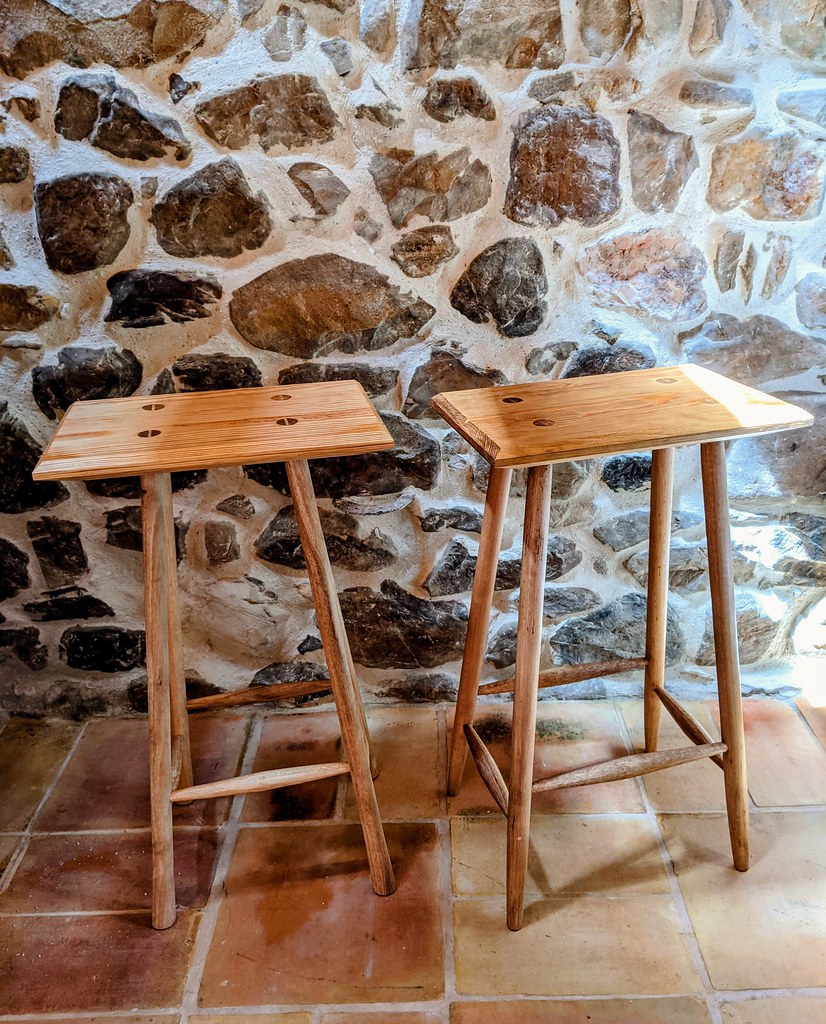 In the pile of stones I installed some kitchen counter tops firstly to help define the space for the kitchen, secondly to provide big surfaces for food preparation and thirdly to eat and drink on. For informal snacking.

We looked for high stools, like bar stools, so we could sit at the worktop but could find nothing that was light and simple. All the barstools were really horrible.  So I thought maybe I could make a pair. I had already assembled a variety of low stools and a bench that were useful, the only difference would be the need to make some rails to cross brace the longer legs, and I'd need to work out the complicated compound angles produced by splay and rake.

I watched online media clips of Curtis Buchanan making a democratic Windsor style chair and it was inspiring, both the chair and the ideology behind the process of it's making.

I glued-up and cut-to-length some left over wood from the old stairs for the seats.  They are wide and generous to accommodate diverse behinds, and thick enough to accommodate the mortices to house the tenons on the top of the legs. I steeply chamfered the underside tapering to the edge so the stools would look less chunky.

Like on the previous low stools the legs are cut down pick handles that flare out at one end bought from a local hardware store (Ferreteria). I'm not sure what the wood is, although its obviously tensile and tough, they're cheap too.

After roughly cutting all eight legs to length I tapered one end for the seat tenons. It was about now that I decided to make each of the two stools different. To give them a slightly different character, one more relaxed than the other. I decided to have different locations of the legs in the seat, to change the splay and keep the rake consistent.

To drill the mortices at the correct angle through the seats I used a rake and splay calculator to determine the sightline and resultant. Don't ask. I then cut a template, one for each stool, to help guide the brace and bit while drilling. It was tricky but worked surprisingly well.

I tapped the legs into the seat, clamped them square at the bottom and began to think about the rails. It would be good if you could rest your feet on them while sitting. Curtis Buchanan has some great advice for how to measure, drill the mortice holes in the legs and calculate the rail length. He uses a combination of rubber bands and bamboo barbecue scewers. That done, I set about making pairs of tapered rails.

I forgot to say that Curtis does most of the shaping of legs, spindles and rails for his chairs using a shaving horse and a draw knife. So I adapted my workbench to be a temporary shaving horse. With offcuts from the hoe handles clamped in the horse I set about shaping the rails. They taper from the middle to the diameter of the tenons at the end. It's a beautiful process shaping the rails, the horse grips and the draw knife cuts with a crisp and satisfying precision. Curtis is keen on leaving the knife marks and delicate faceting visible, so I did the same.

After a bit of fiddling for a tight fit, the legs and rails could be assembled for each stool. I decided to taper the end of the legs on the more relaxed stool because using the drawknife was so much fun, and it lends a kind of springy lightness as they meet the floor. The other still has the flared end of it's hoe handle origins. It's more grounded.

I cut v-shaped slots at the top of the legs, added glue to all the joints and assembled the stools. Wedges driven into the slots of the tenons lock the legs into the planed and chamfered seat. I trimmed the tenons flush and finally cut the legs to length and to the angle at which they meet the floor. The stools work! Perfect for the height of the counter, easy to move and satisfyingly rigid.

I'm slowly learning to live with less, and experimenting with how to consume fewer resources. As part of these processes I'm making some of the things I might need or want, not in any dogmatic 'alt-right preppers' kind of way - I'm not about to be refining ore and forging weapons.

Principally I'm trying to be more conscious of what might make life joyful, but not at the expense of others. Sharing what I've learnt is also important.

Related projects include a bamboo bicycle I've hacked a chair, tried to grapple with the possibilities offered by jigs and written more generally about things. 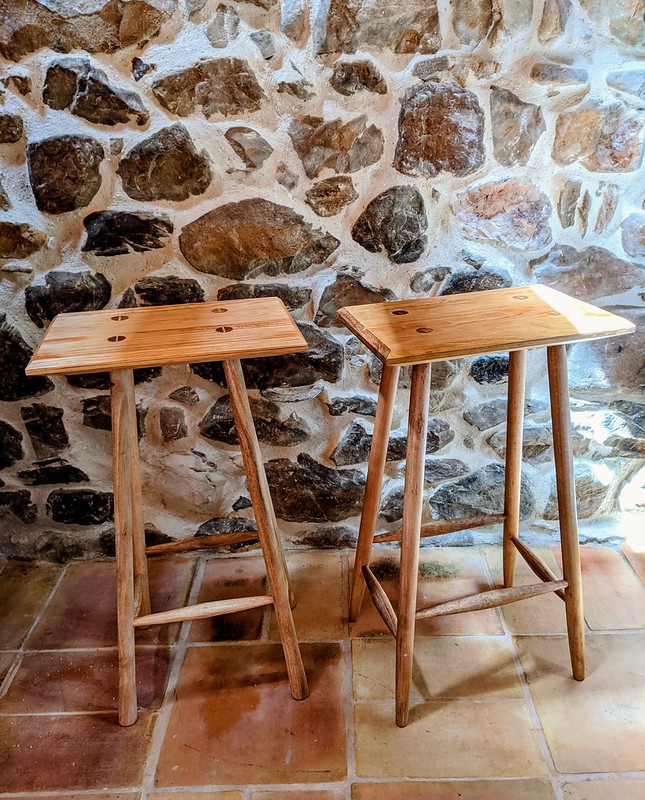