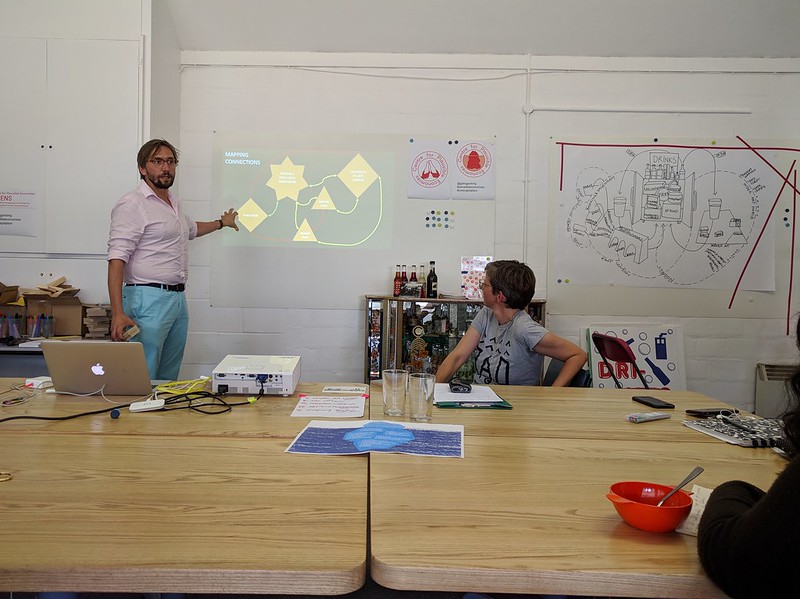 I participated in the launch of the Centre for Plausible Economies which included a day-long programme of workshops, talks and refreshments.

The day began with our hosts  Kathrin Böhm and Kuba Szreder introducing diverse economic models for the interaction of art and values not valued by competitive markets. Everybody is exposed to economic forces, but nobody seems to have sufficient agency.

Responding to this frustration with upbeat pragmatism, the Centre for Plausible Economies intends to bring together artistic action and critical thinking to reclaim economics, and to occupy economic thinking.

During two years of research, the Centre will gather enthusiasts, activists, artists, and theoreticians who will activate artistic competences and communal imagination to take economic matters into their own hands.

Kathrin and Kuba suggested that the 2018 programme will focus on ‘Redrawing the Economy’ as a first step towards being able to picture, grasp, and possibly re-organise economic diversity. 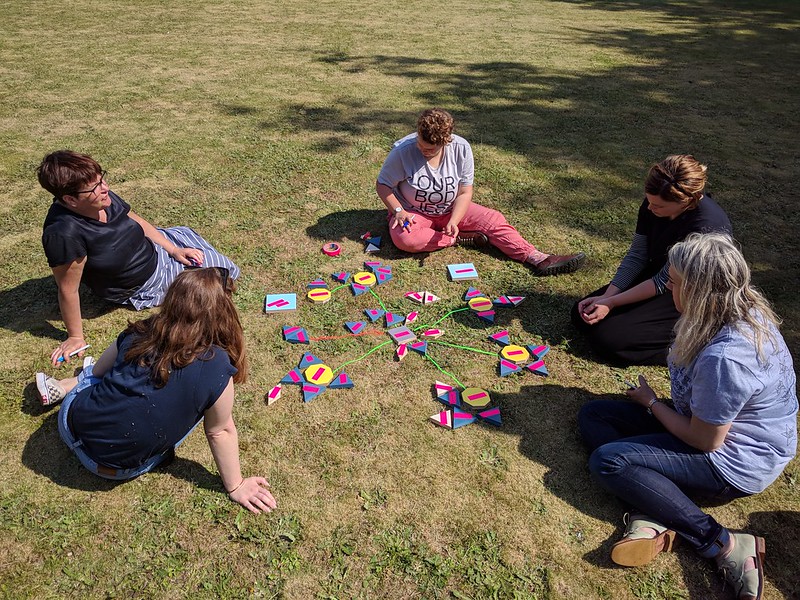 Kuba gave a sketch of the highly visible artworld, that is dominated by commercial galleries, cometitive markets and auction houses.

He then began to account for all the 'hidden' activity that supports this economy; the labour, investment, love, creativity, friendships, resources, shared knowledge, precarity and energy that produce a vast cultural commons.

He referenced the popular iceberg model of economic activity associated with feminist economic geographers Gibson Grahams research, and it was thrilling to have Katherine Gibson in the house!

We then divide into five working groups - Art and the Academy, The Artworld, Company Drinks, Economy of Flowers in Colombia - a group visiting as part of the Community Economy Research Network (CERN)- and the Asociacion de Arte Util - to begin the difficult task of tracing some existing but suppressed economies - those below the waterline.

We retired to the bowling green to discuss and then begin to trace our chosen economies.

I was part of The Artworld working group, we introduced one to another and quickly decided it would be impossible to trace The Artworld. Instead we used one of our group as a 'case study' and traced the ecology that was illuminated through a narrative of her experience as an artist.

I tried to keep an account of what was revealed: including the dense network of supportive relations, of family, friends and colleagues, of how opportunities are opened through social contacts, the love for art which is both a source of pleasure and fulfilment and source of exploitation, the diverse investments involved - of time, continuous learning, affective labour, and the joy when an exhibition, project or artwork is shared and finds its audience.

We also discussed the means by which money flows through this economy in diverse and often precarious streams, including state benefits, commissions, fees, bursaries, sales, wages, loans and debt.

After a few hours, the working groups work was done. We toured the Bowling Green and each Group made a short presentation narrating our economies and their tracing, or modelling back to everyone else. We shared our experiences. 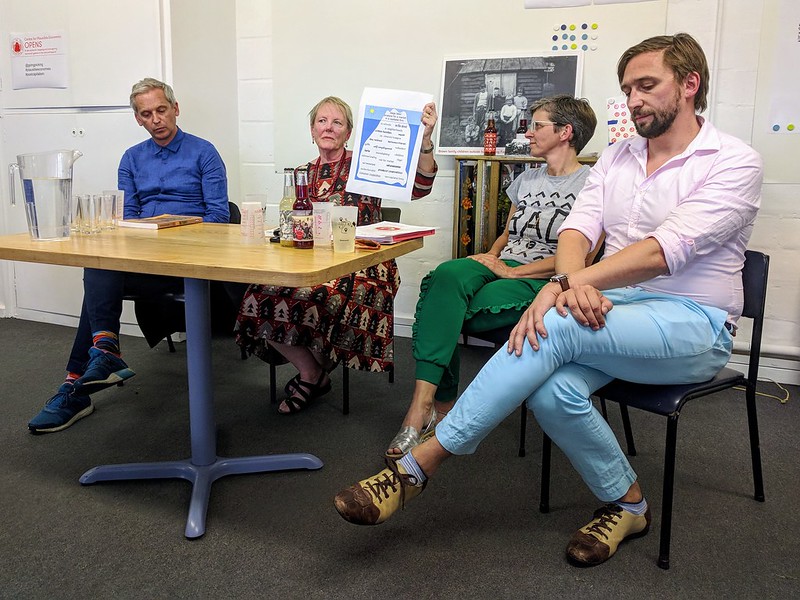 Artist and founder Kathrin Böhm outlined Company Drinks an art project in the shape of a drinks company which links the history of East Londoners‘ going hop picking’ in Kent to the formation of a new community enterprise, which brings people together to pick, process and produce drinks -  syrups, sodas, saps, tonics, ciders, pops and beers - and something useful with and for each other.

Researcher Kuba Szreder traced the economic underpinnings of the current expansion of art beyond the field of art as made visible through a market - a slight recap of his earlier presentation, and Alistair Hudson of the Manchester Art Gallery introduced the plausible economy of the Office of Useful Art, a project that has a growing archive and an expanding network of institutions and participants. How to make it resilient?

Afterwards Company Drinks invited everyone to drinks and snacks in the gardens of its new premises, a former Lawn Green Bowling Club in Barking Park. 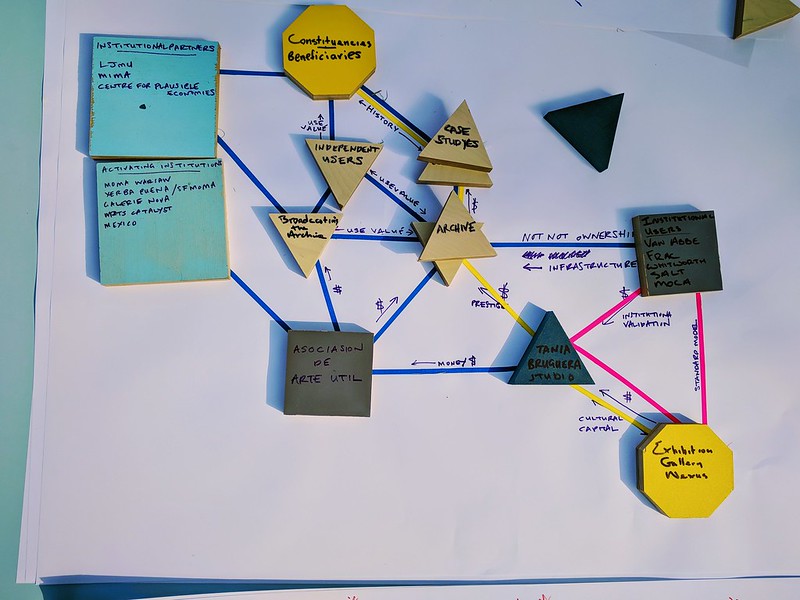 Related tracing projects include Tracing Values, Utopoly and a text about Common 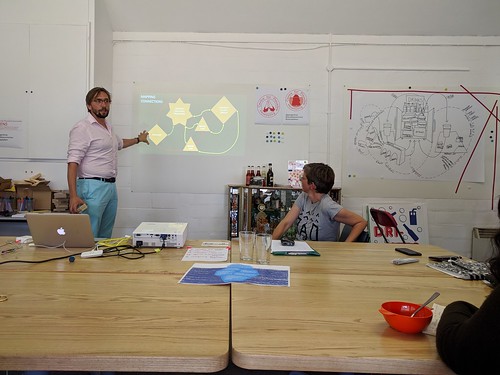