Invitation to join the debate

Guernica was brought over by the Stepney Trade Union Council who approached the gallery for help with their ambition to fight Fascism and to promote a Communist spirit within the working classes. They wanted to use a painting by ‘a famous Spanish painter’ to help enlist volunteers for the Republican cause in the Spanish Civil War.

Macuga has brought back to London, Picasso’s tapestry of Guernica that hung outside the Security Council Chamber at the United Nations Headquarters in New York from 1985 to 2009. This work was famously covered with a blue curtain at the time of Colin Powell’s presentation making the case for the invasion of Iraq in 2003.

In both instances, the image of Guernica has been used as a backdrop for political debate. Macuga has designed the exhibition space at the Whitechapel with an emphasis on accommodating and encouraging meetings for discussion groups, with Guernica used once again as a backdrop. On the occasion of the G20 summit in London next week, we would like to invite you to participate in an informal round table discussion responding to the current political and economic climate. The meeting will be held from 11am-1pm on Thursday, 2nd April.

We would be honoured however, if you were able to join us. Our discussion will be held in the installation and will be filmed by the artist. 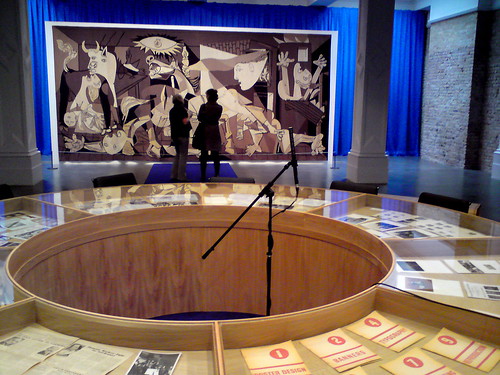