As part of Critical Practice I’ve been working on a series of events/walking tours/discussions. Over the next two years, we will work with a wide range of international partners to explore value from various and perhaps even contradictory perspectives.

One strand of this research The Brokers: People, Spaces and Values will be a series of guided tours lead by a specific Broker, they will explore how different social practices of evaluation, are situated, localised and embedded in particular places, buildings, public spaces and institutions.

Who: The Brokers are environmental lawyer and Dotmaker founder Rosie Oliver, and economic geographer Angus Cameron

Where: We will perambulate the Isle of Dogs, Greenwich and Blackheath, unpicking notions of waste, the unwanted and the marginal. The walking-tour format aims to investigate the specific situation of waste... Each activity will last an hour and a half, and comprise a combination of prepared tour, and animated discussion.

We met at Mudchute DLR on the Isle of Dogs and set off with Rosie.

As we walked Rosie explored various aspects of waste in relation to the history of the docks, the Isle of Dogs and London more generally.

Rosie suggested, that London is built upon waste – landfill has reclaimed usable space from the river and its marshes, and often built of waste – ash from fires collected by ‘dustmen’,  was transported to brickworks and incorporated into clay before firing, returning as bricks.

These bricks built houses, and the huge warehouses to process the astonishing inflow of goods into docks from Empire.

At the moment, we recycle some materials, burn some for energy conversion.....and bury the rest.

We wandered to Mudchute farm, a model-farm evolving in the waste-land remaindered by the intensive bombing of the Millwall docks during WW II. It was a perfect place to experience the most uncanny of wastes, shit.

We saw a mountain of manure, rotting down into the black-gold of compost.

We stood in front of a beautiful pig, Rosie explained that London was once littered with them. Household waste – collected by Pig Men - was eaten by the pigs, excreted, gathered, distributed to market gardens, and spread to fertilise the land.

Similarly, before 1858 and Bazelgette’s ring-main sewerage system, the human shit of London was collected by the terrifying ‘Nightmen’. Under cover of darkness they emptied overflowing cesspits and distributed their contents to nearby farmers, a practice discouraged with the realisation (in the 1850’s) that disease contagion can be water/faeces-borne.

What to do with our shit, is a problem that continues to haunt us.

We crossed under the river, and ended at low-tide on the Greenwich foreshore, which is essentially the resting place for household waste since the Tudor period.

Here we got to scavenge for bones, oyster shells, various bits of pottery, we even found a fragment of a ‘witches' Bellarmine pot - a premonition of things to come, clay pipe shards, and plastic detritus.

We met a contemporary Mudlark, larking.

After lunch at the river-fronted Trafalgar, we set-off with Angus Cameron on a short walk, we gathered adjacent to the Prime Meridian and discoursed on wastes; the meridian, the paradox of zero, measurement, standardised time, the thickness of pencils, cartography, the enclosure movement, borders, money, the significance of borders to value creation, commons, wastes and marginal value, marginal characters like ‘witches’, marginal precisely because they inhabited the wastes, and much else besides.

Waste for Angus was not the things we no longer want, but ‘the wastes’, the unclaimed, unoccupied or long-abandoned. Wasteland. Angus suggested that wastes were eliminated through 'primitive accumulation'; the siezure, boundary definition and subsequent property claims to land, by capital.

The sun dropped below the observatory, the temperature followed.

We walked to keep warm, down to where the Prime Meridian is set into the pavement, and then on to The Queens House where we sheltered in one of the covered walkways.

Angus continued his productive rambling by introducing Sir William Petty, who during the 17th C – when the house was being completed - mapped, regulated and regularised the Irish countryside.  Petty accompanied Cromwell to Ireland – he had previously been Thomas Hobbes’ secretary- and produced a fledgling political economy by representing land  - much of it wastes - and its inhabitants in purely cartographic and numerical terms.

People and places were produced as economic objects, all the better to eliminate waste.

We digressed into Bataille to see if we could connect the waste of the morning to that of the afternoon.

We pursued connections between waste, the unwanted, the uneconomic as waste, debt –Petty had calculated the value/price of money as interest, synthetic CDO’s, the waste of the economic, the unrecoverable and Bataille’s ‘accursed share’.

Cold began to take hold. We thanked our Brokers - spontaneous applause - and headed for some tea or beer, conversation sparking as knowledge rearranged itself into new forms, again, and again and again. Great day.

The walk is related to Anthropocene Walk, subsequent mudlark and the Development bike tour 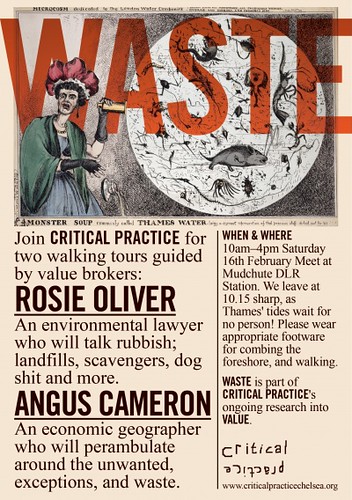