I wrote a short text for Distributed, about the possibility of re-imagining the world in common. Distributed is edited by David Blamey and Brad Haylock for OPENeditions and was launched with a symposium at the Royal College of Art. 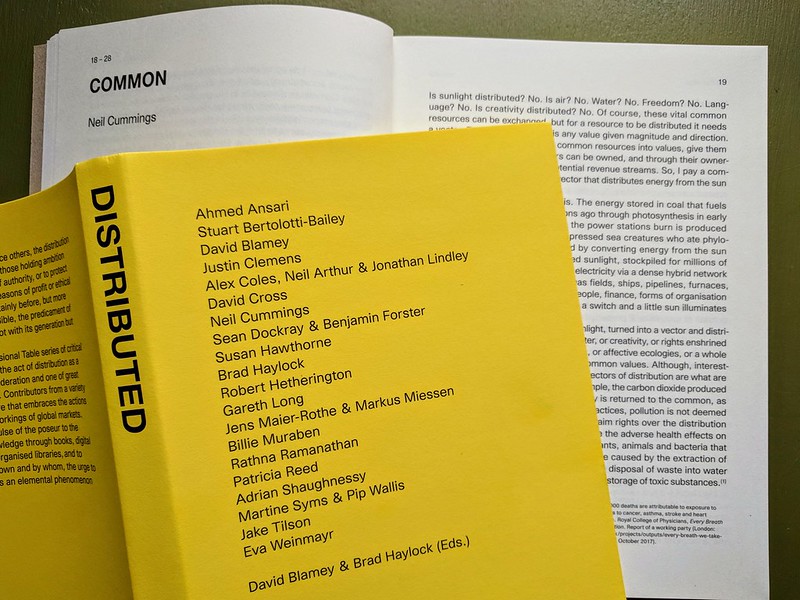 Vectors can be owned, and through their ownership they convert values into potential revenue streams. So, I pay a company that claims ownership of a vector that distributes energy from the sun as electricity to my home.

This stored sunlight, stockpiled for millions of years as carbon, is turned into electricity via a dense hybrid network - of plants, animals, mines, oil and gas fields, ships, pipelines, furnaces, turbines, cables, knowledge, skills, people, finance, forms of organisation, and software and distributed. I flick a switch and a little sun illuminates my room.

Electricity is the common of sunlight, turned into a vector, and distributed. The same thing happens with water, or creativity, or rights enshrined in laws, or languages, or public research, or affective ecologies, or a whole host of other common resources, and common values.

Although interestingly, what is not accounted for in these vectors of distribution are what are historically termed 'externalities'. For example, the carbon dioxide produced in the distribution of sunlight as electricity is returned to the common, as pollution in our biosphere. In economic practices, pollution is not associated as part of the property of the those that claim rights over the distribution of energy. It's external to the vector. So are the adverse health effects on humans and all the other entities, all the plants, animals and bacteria that make up our worlds. Same with the damage of extraction of energy by mining, drilling, or fracking, or the disposal of wastes into water systems, or spills from pipelines, or long-term storage of toxic substances. The violence and damage of distribution is returned to the common, and mostly unaccounted for. This has to change.

The work of economist Elinor Ostrom is part of this change. Ostrom, through a lifetime of research has demonstrated that there are no externalities. Our extraction and distribution of carbon, or fish, or creativity, has been enabled because economic practices, scientific disciplines and political discourse fail to account for all of the costs, in what she has termed ‘social-ecological system’ (SES). Ostrom’s SES’ begin to model interrelated networks of animals, bacteria, plants, minerals, labour and energy and explore how governance affects all of the components that produce our commons of air, energy, water, or soil.

The common is a term used to denote cultural and, more traditionally, natural resources accessible to members of a given community: for example the rights to graze animals, collect firewood, harvest fruit, or catch fish. I would suggest that resources and values held in common need not be distributed, they can freely circulate, be used and exchanged outside of conventional property relations, without ownership. This may not be true for everything, but for many things, and that resources held in common enrich rather than deplete the possible. 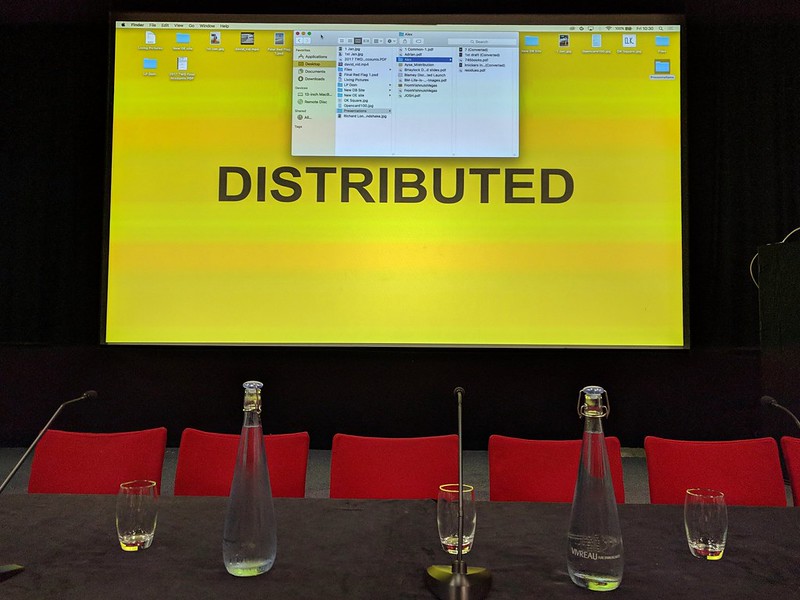 As with the example of electricity, there is always enormous and often hidden violence necessary to make common resources a vector, a value for distribution. This violence has been ongoing since at least the beginning of the 19th Century when 'industrial capitalists' competed on a global scale to monopolise energy, minerals, land, processes, and the manufacturing and distribution of previously common things. Even knowledge and ideas.

It's the foundation of what McKenzie Wark, in his book The Hacker Manifesto, names the vectoralist class. A class that has the power to claim the rights to the vectors that distribute resources, of that which would otherwise be common.

It’s no surprise that the formation of the vectoralist class coincides with ‘the great enclosure’. A series of Acts of Parliament - the majority of which, some 4,000 acts were passed between 1730 and 1839 - enclosed previously open fields, forests, water and common land in England and Wales, creating property rights of resources that were previously common.

Already rich landowners used their control of parliament for their private benefit, to consolidate farms, concentrate land value and expropriate resources. The process also accelerated the creation of a rural poor, who became labour for the emerging urban industries. Vectoralists insist that enclosure is necessary for development; to encourage investment, innovation and the more efficient distribution of resources. [...]

I read an extract of the text, at the book launch and Symposium:

DISTRIBUTED, a publishing symposium about the act of distribution across the spectrum of cultural production. COMMON MARKET, a small producers’ fair celebrating the free movement of ideas by trading conceptual goods and services.

The text is related to themes in Open Cinema, mudlark and Sunlight 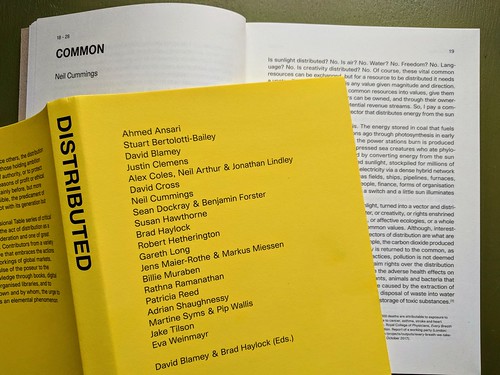 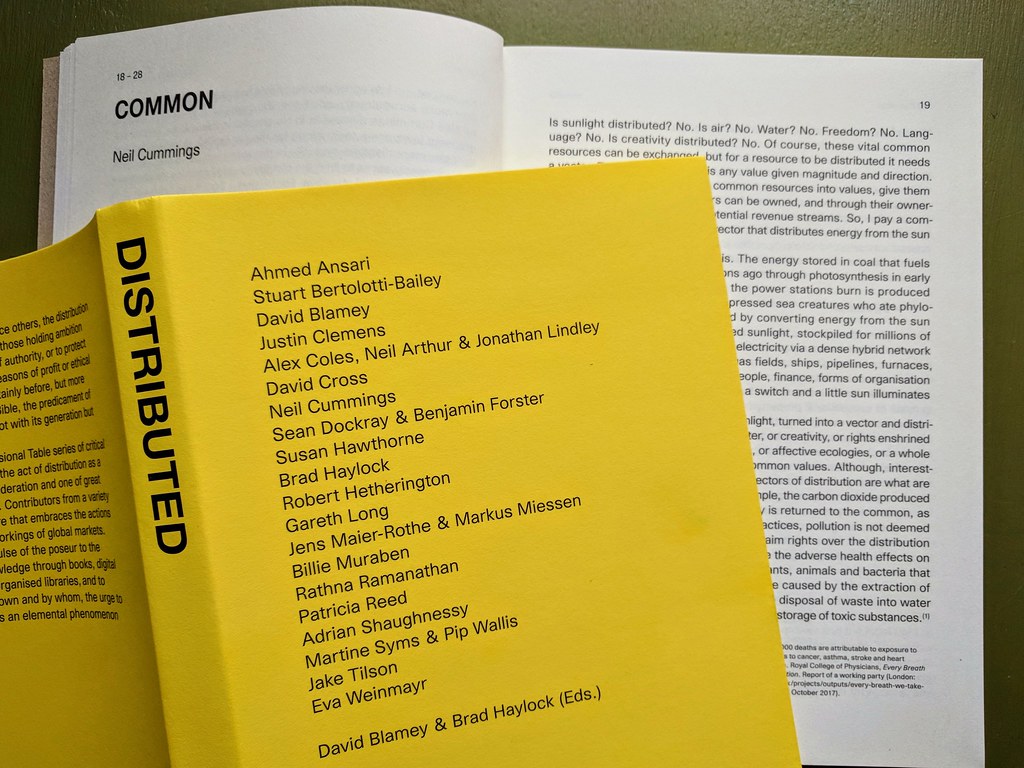